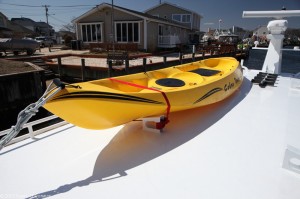 When Superstorm Sandy barreled down on the town of Point Pleasant you could say that Carlos and Maria Santos went their separate ways. Maria left, taking the kids to the temporary shelter setup at the nearby school. Carlos stayed, to keep an eye on things and to man the three pumps he set up under the house.

They were only about a mile apart, but when the flood waters started rising it was like Maria and Carlos were separated by a huge ocean. First the power went out, then Maria’s phone service. The pumps Carlos was tending were overwhelmed and Carlos retreated to the second floor as water filled his house. Maria, back at the shelter was nervous, the kids were crying, she couldn’t sleep. Carlos took a nap. When he woke up and couldn’t reach Maria by phone he called the insurance company, just to get a jump on things.

The next morning rescue crews deployed to search homes and Maria insisted they go to her house to look for Carlos. When they arrived, Carlos sent them away – he wasn’t ready to be rescued.

Eventually, when his work was done Carlos untied his kayak from the second floor banister, launched it out his front door, and paddled his way through the streets to the shelter where he was reunited with his family. What did Maria have to say? Well, you can hear about it all right here:

But needless to say, Carlos and Maria will never split up again.