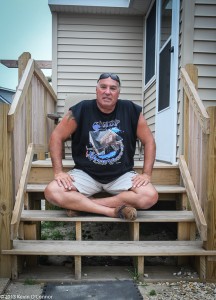 Our director, Thom, stepped out of the car with a sort of stunned look in his eyes. “What’s up?” I asked, expecting to hear about his day scouting and about yet another devastated community on the Jersey Shore. But that wasn’t it.  “I just met this guy Nick,” he said shaking his head in disbelief, and then he told me Nick’s story. Then I heard the story from Nick himself, not once or twice but maybe a dozen times, because now we were recording it on camera and because it’s that kind of story.

Nick stayed in his home when Super Storm Sandy hit, and it hit Nick hard. He ended up on a roof, then in the water, then underwater. He reached for power lines to save his life and for his cell phone to say his goodbyes. He heard sounds he’d never forget – houses cracking in half and rushing at him on ocean waves. He felt hopelessness, like when a police officer told him there would be no rescue and asked him to write his social security number on his arm.

But the next day Nick was still there on his roof and alive, which is why he is able to tell his story.