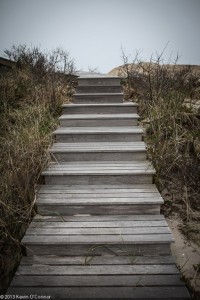 “We’re going to rebuild our home.” It’s a refrain I hear as I move around the storm-damaged neighborhoods of the Jersey Shore. People are determined to rebuild their homes and it’s an understandable sentiment. Well… I thought I understood it. As it turns out some people are talking about their houses (I know three of them very well) but many others are talking about their home, that is to say their township or their neighborhood. Both “homes” are important. A roof over your head is critical, but so is a school for your kids, a church for your soul and a grocery store for your survival. And on the Jersey shore both “homes” need rebuilding.

And so it was as I walked and filmed on the famed boardwalk of Seaside Heights on a cloudy day in mid-May. At the time there was a frenzy of construction activity. Sandy destroyed most of the boardwalk, ripping up its planks, snapping in half 30foot pilings, and washing away nearly 200 feet of a 600foot pier that had stretched into the ocean. It was a complete loss. On that pier sat nearly a dozen amusement park rides until Sandy had her way with them and hurled five of the rides into the ocean, including the now iconic Jet Star rollercoaster. Somehow the Jet Star remained mostly intact and upright even as it sat in the Atlantic Ocean. It was an eerie sight and it has become one of the most unforgettable images of the storm.

But we didn’t come to Seaside Heights to see the destruction, we came to see the rebuilding, and on this day we saw plenty of it. There were cranes, bobcats, trucks, and crews frantically working to get things fixed by Memorial Day weekend. If the boardwalk could not be rebuilt by then, the scores of business that line it couldn’t open for the season and that would be a disaster for the town. Summer tourism dollars drive this community – they fill the tax coffers, pay the salaries of thousands of workers, and maintain the schools. One missed summer wouldn’t just leave the town wanting for dollars, it might permanently change people’s behavior. Tourists might decide to go elsewhere and never come back. So the race to rebuild was on.

It may seem slightly less urgent or noble to rebuild a boardwalk than a house, but it isn’t. In fact, rebuilding a single house is far easier than restoring a community or an entire town. The good news is, they made the deadline. The boardwalk and the businesses reopened in time for the Memorial Day summer kickoff. And the work of restoring a community continues.