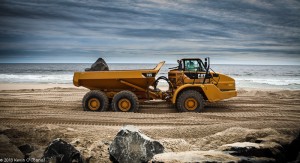 As long as kids have gone to the beach they’ve built sand castles, and I suspect they always will. And for every sand castle built most eventually end up with a wall of sand in front of them. The tide always rises and every kid, seeing his prized creation threatened by the oncoming waves, thinks the same thing: “Build a wall!”

In Bay Head, N.J. that simple childhood instinct is alive and well, post-superstorm Sandy. A group of about 20 beachfront homeowners are, on their own nickel, building a “revetment wall.” It will sit on the beach between the ocean and their homes, a big bit of industry that starts with digging down about 20 feet, then filling the hole with 6,000 pound stones trucked in from nearby quarries. Those massive stones are then covered with more sand. The idea is to break the wave action kicked up by a storm and provide a last line of defense with a barrier that, the homeowners hope, won’t wash away.

There’s pretty good evidence this system can work. Bay Head built another revetment wall about 50 years ago and even though it was covered in sand, invisible and mostly forgotten by local residents when Sandy hit the homes standing behind this wall were mostly spared during the storm. Hence the desire by those living just south of the old wall to build a new one.

But the idea is not without controversy. Twenty-foot rock walls buried beneath the sand are not natural elements on a beach. And the wall won’t stretch the length of the beach. Someone’s home will always be adjacent to where the wall ends, and therefore subject to what the engineers call “end action” – an ominous term no matter how you parse it. Oh, and those nickels the homeowners are spending themselves, well, there will be plenty of them. This little wall is reported to cost $2.2 million, and there are only so many kids with buckets that big.

When I walk the beach in the early morning I rarely see yesterday’s sand castles still standing; it seems the waves always win out. But for my money (and of course it’s not my money) I say let them build the walls. And let them try other ideas like beach replenishment, planting dune grass, raising houses and whatever else they can think of. The houses and people along the Jersey shore aren’t leaving, so it might be time for a few more walls.