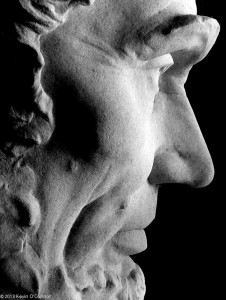 Normally on This Old House we have great access to experts and unique locations. Telling folks you work with the show is usually a golden ticket that can get you behind the scenes of some spectacular places.  I’ll never forget when I was at the Lincoln Memorial in Washington, DC, for example, and a Park Service employee invited me up the statue of Abraham Lincoln onto some scaffolding placed there for a once in a lifetime repair. Fewer than 100 people, I was told, had ever seen the sculpture this close, and when I laid eyes on the tiny caliper marks made by Daniel Chester French during the statue’s construction, I was literally awestruck.

Access is a good thing, but it doesn’t always come easily. Recently I posted about our day on the boardwalk in Seaside Heights and about the now iconic image of the Jet Star rollercoaster sitting in the Atlantic Ocean (see below). Seaside Heights Mayor Bill Akers had secured access for us to this incredible site that was destroyed by Sandy and undergoing a frenzied re-construction. After filming a scene with the mayor we thanked him and moved off the boardwalk and headed to the beach so we could shoot a DTC (direct to camera) in front of the eerie image of the waves crashing onto the Jet Star.

There was just one problem: the access road to the beach 0was blocked by a New Jersey state trooper and the mayor – our ticket to film anywhere we wanted –– had just left us. What to do? Well, in these cases you hope the gatekeeper (the trooper in this case) happens to recognize you and also happens to be a fan of the show. So, the crew sent my familiar face forward to the squad car. As I approached and saw no softening of the trooper’s stare I realized now would have been a good time to be Norm Abram instead of Kevin O’Connor.

Okay, maybe he didn’t recognize me but I was sure he would be familiar with the show. So, as I approached, carefully, and as he lowered his window, reluctantly, I decided turnabout was fair play. I stood tall above him as he sat low in his seat and I pulled out my credentials – a business card in a cheap pleather case – and flashed them inside the cruiser. “Kevin O’Connor, This Old House” I said in my most authoritative voice. “We are going to film on your beach.”

Silence. Then he got out of the car. Shoot. Now he was the tall, towering one. The silenced persisted until finally he spoke. “Let me see that again” he said, his stare softening. “Kevin O’Connor, This Old House?” I repeated, in the form of a question this time. After all, he had a gun and all I had was a cameraman.

Then he laughed. Maybe at my gall, maybe at the situation, or maybe just because he loves the show like so many others. In any event, he waved us on to the beach and we shot our DTC. And when we were done, I shot this picture, which has become one of my most memorable.